I listened to Naomi Shahab Nye read her poem Cross That Line this morning and I knew immediately that I had to write a poem about the Cellist of Sarajevo and the concrete roses that are now all over the city as a physical reminder of the war and genocide that took place there. If you've never heard of Vedran Smailovic, Google him. There is an excellent fictional book about him by Stephen Galloway and YoYo Ma has a song about him. There is even film footage of him on Youtube. Vedran played Albinoni's Adagio G in minor every day for 22 days risking his life. The siege of Sarajevo in Bosnia lasted for four years, from 1992 to 1996. It is the longest siege of a capital city in modern history. If you want to know who inspires me, it's the man known as The Cellist of Sarajevo. 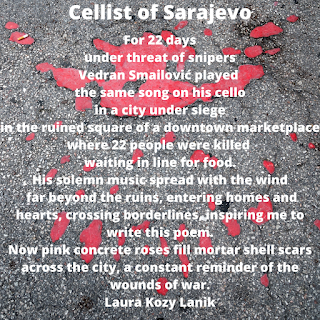