This poem, Moments of Joy, was inspired by one of my students today and something they said on their Pandemic diary podcast assignment. "It's the little things that make us happy."
I want to know what brings you joy? What is one little thing that makes you happy? Be on the lookout for the little things that bring you moments of joy.
Follow me by email to get these poems delivered to your inbox. The email button is at the top of the right side column. Find me on Instagram @booksnob24
Support me and buy me a coffee: https://www.buymeacoffee.com/LauraKozyLanik 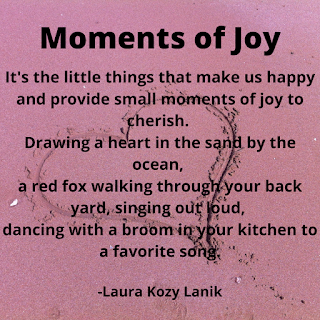 Who suffers from anxiety?  Me! I was totally feeling anxious and fidgeting and I literally have to move. I can't even meditate and sit still. I have to do walking meditations.

This is an excerpt of my poem: Anxiety. I hope it resonates with those of you who are also dealing with it.

Follow me by email to get these poems delivered to your inbox. The email button is at the top of the right side column.  Find me on Instagram @booksnob24

Support me and buy me a coffee if you want: https://www.buymeacoffee.com/LauraKozyLanik 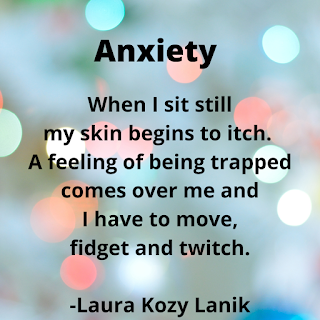 I started a creative poetry project on Jan 31st, 2021. I joined #the100dayproject on Instagram and decided to write one poem every day for 100 days and then create an image and put the poem out on Instagram aka "into the world" for all to read. I decided to also share it on my blog.

My first poem is Moon Walk. I'm sharing an excerpt of the first stanza of my first draft.

I met a group of friends I haven't seen for months to join me for a walk outdoors under the light of the full moon. It was cold and it was glorious. Then some of us went to an ice bar and had dinner at a speakeasy. I loved every second of the moonwalk.

I hope you enjoy this poem. And next time there is a full moon- go out for a moonwalk. 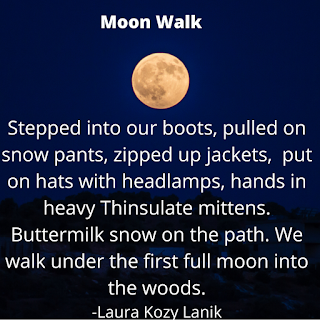 Remembering Another Grandpa with a Poem

Remembering Another Grandpa with a Poem 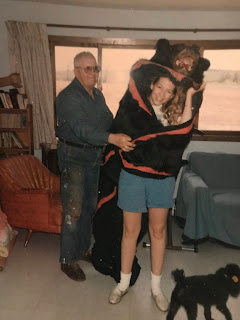 Today is my Grandpa, Harvey Spaulding's birthday. He has been the topic of many of my poems. I loved him so much and he lived two hours away from me in Wisconsin. He was an important person in my life and he taught me so much. He was a great storyteller and a comedian.

This is the two of us in the late 1980s. I'm wearing blue shorts with a bearskin rug wrapped around me. My grandpa loved to go hunting and this was the first bear he shot.

The poem The Right to Bear Arms was published in 2016 by The Fem online literary Magazine.

Here is the link to my published poem:  The Right to Bear Arms

The Right to Bear Arms by Laura Kozy Lanik

My grandpa taught me how to shoot a gun.

He took me raccoon hunting at night.

and we baited the black bear in the daytime,

driving the back 80 dirt road in a rusty blue truck.

Our gun rack hung in the bathroom,

the bullets in the kitchen drawer.

The 8 point buck I shot on opening day,

trailed blood for a mile before I found him.

I rode the yellow bus to a private Catholic school in town,

sitting next to my seventh-grade crush, John.

On a crisp Fall day,

in back of the coat closet. He called his friend.

They met in the woods behind 7-Eleven,

where his friend pointed the gun at him.

He pulled the trigger and

John drowned when his lungs filled with blood.

It made my grandpa very sad that I never went hunting or shot a gun after John died.
This was a major turning point in my life. Thanks for reading.

Email ThisBlogThis!Share to TwitterShare to FacebookShare to Pinterest
Labels:Books Poetry

Remembering My Grandpa with a Poem

Remembering My Grandpa today with a Poem 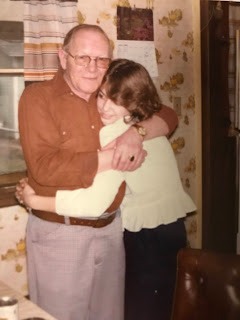 Today is my grandpa Max's birthday and while he died many years ago now, he is still an important piece of my heart and my life and I miss him.  This summer I wrote a poem about one of his experiences during World War II and it was published this Fall by Origami Press in their Best of Kindness Anthology 2020.  The poem, "A Silent Interaction" earned an honorable mention placing as one of the top 6 poems published out of 700 poems submitted. I'm so proud of this poem and so proud to be the granddaughter of Max J Kozy. I hope you enjoy the poem.

My grandpa told me about a man he met

a man who spoke a different language

who practiced a different religion

who lived in a concentration camp

until it was liberated by American soldiers.

My grandpa told me this man changed his life

and in these last 50 years

even though he never knew his name

he never forgot him.

My grandpa told me he started smoking

when he enlisted in the Army Airforce

the day after Pearl Harbor was bombed.

He put his army-issued cigarettes

in his shirt pocket and carried them everywhere.

My grandpa told me towards the end of the war

he couldn't remember which one,

Where he noticed an emaciated man

lying on the cold, hard ground

too weak to get up and

walk out of camp with the others.

This man reached out his hand

and my grandfather gave him the cigarette

My grandpa told me he helped the man

he held it to his mouth

and he puffed once, then twice.

The man smiled and my grandpa smiled too,

His dull eyes lit up with a spark

before he passed from this world into the next.

My grandpa told me of the silent interaction

between two men at the end of the war

and I never forgot this simple act of kindness and

how it created a ripple that has lasted for generations.