The Execution of Noa P. Singleton by Elizabeth L. Silver 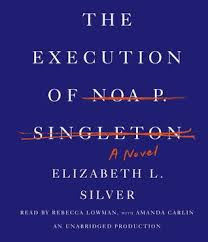 The Execution of Noa P. Singleton by Elizabeth L. Silver

Noa committed a capital crime and is sitting on death row in Pennsylvania. She has six months left until execution day.  She is out of appeals and has resigned herself to her fate.

Seemingly out of nowhere, the victim's mother, a lawyer, has formed MAD, Mothers Against Death, and has had a change of heart in Noa's case and wants to plead for Clemency.  Oliver is the lawyer working with Marlene Dixon trying to come up with any additional evidence in the case.  Noa is skeptical of Marlene's change in attitude "at the last minute" and doesn't believe she wants to help her at all but has some other motive.

Noa holds the secret of Sarah's death and refuses to tell anyone about it, including her defense.  During her trial, she withheld her testimony and didn't give her lawyers any significant help.  She talked her estranged father out of testifying on her behalf.  She has no friends, receives no visitors and is contemplating her last words and the events leading up to the fateful day, 10 years prior.

The Execution of Noa P. Singleton is a page turning thriller.  I finished it in 3 days.  Whatever side of

I thought this novel was smart, gritty, and so utterly believable that when you get to the ending you might want to scream.  The characters are complex, especially Noa and you know someone is not telling the truth.  Yet everyone's idea of truth and perspective is different and Silver knows how to play with perspective.

Final verdict:  I loved it.