The Baker's Daughter by Sarah McCoy 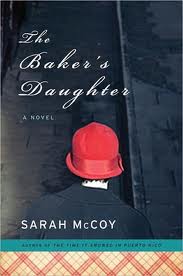 The Baker's Daughter by Sarah McCoy

The Baker's Daughter is a novel that will warm your heart and tease your palate.   Germany is a country of people with mountains of pride and a somewhat painful past.  It is a country of beer, bratwurst, bread and war.  Elsie,  the baker's daughter lives in Garmisch, Germany during the second world war.  Elsie is young and naive and becomes a witness to shocking horrors that she didn't believe Germans capable of.

Fast forward to El Paso, Texas in 2007 where we meet Elsie and her daughter Jane, as they are interviewed by local reporter, Reba Adams.  Reba is drawn to these two women, their stories and of course their delicious baked goods.  A picture hangs on the wall of Elsie and her mother on Christmas Eve, 1944, in Germany, and Reba is curious is about what really happened that night all those years ago.  Reba has her own secrets that Elsie and Jane work to pry loose as they wonder why she wears her engagement ring around her neck.

In this amazing parellel storyline, we learn Elsie's and Reba's story and how their two histories intertwine.  My grandmother was 100 percent German and Elsie reminded me of her.  My grandmother was not a baker by trade but she did bake.  Her cinnamon bread was the best.  The Baker's Daughter contains some recipes for the delicious bread mentioned throughout the story and I can't wait to try one of them.  I loved the German words, the culture, the historical setting and time period in the book, all of which made me long for my lost German heritage.

My grandfather flew in Ninth Army Air Force during the war and McCoy mentions the Ninth in the book as a group who visited Garmisch, Germany.  It makes me wonder if my grandpa was stationed there or visited after the war.  This book contained a lot of personal connections for me.

The Baker's Daughter is a multi-layered book with themes of war, immigration, and human cruelty.  It is also a story of full of love, food, compassion and survival.    This is a book you will definitely want to savor.
Gutenacht.