Roots by Alex Haley. Week #2 of the summer Read-A-Long

Note:  I am reading ROOTS in honor of my former student Quincy Blue who was recently found murdered, his body burned beyond recognition, in Saint Paul, Minnesota.

I had an extremely busy week and didn't start reading ROOTS until Sunday when I read almost all 100 pages.  ROOTS is extremely well written and very readable.  I found that I didn't want to stop at page 200 but I did.

This week we find Kunta at 10 rains, entering his manhood training and becoming a man of the Mandinka tribe.  I figure by page 200 Kunta is probably about 17 rains as he is captured by the white man and forced aboard his big canoe in chains.

Like week number one, three important events or instances stood out for me and I would like to highlight them.

One, Kunta enters manhood training.  He is taken from his home, hooded and led through the forest where he will become a man in four moons.  He endures beatings, wrestling lessons, hunting lessons, and night walks where he learns to read the stars.  All the young Mandinka boys are circumcised during manhood training.  Griots came to tell the history of the Mandinka's which went as far back as the great kingdoms of Mali.  I really liked reading about manhood training and I think we should adopt some sort of rituals that mark womanhood and manhood for Americans.  What would you include in a training for teens to make them into adults? 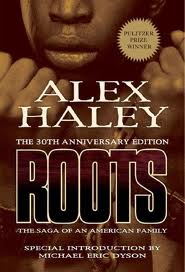 Two is the fact that I really wanted Kunta to continue living in his Mandinka village in The Gambia and continue with his travels.  I enjoyed learning about village life and the court system in Juffure.  I knew he was going to be captured by slave traders and I found myself lamenting Kunta's untold tale.  What would his life have been like if he lived his whole life in Juffure, taking a wife and having children?  Traveling to Mali with his brother.  What other interesting adventures Kunta would have had in his place of birth? Alas, Kunta's story leads him to travel across the ocean and never see his family again.

Three, Kunta is captured by slave traders while he is out looking for wood to build a drum.  He is surprised by them in the early morning.  He is beaten, scared and made to suffer many indignities.  He is taken aboard ship where the horrific stink assaults his nose.  Thus begins his journey on the Atlantic, called The Middle Passage.  The treatment of slaves has long bothered me, especially when they are portrayed by whites as less than human and used as a tool to make money.  Most slaves didn't live longer than ten years, as they were worked so hard and beaten so badly.  I feel fear for Kunta and sadness for his family.

Next week:  I plan to read from pages 201-301 and post on Monday.
These are the bloggers/readers participating in the Read-A-Long.  Please visit them and comment.  Also if you are participating and want to be included on this list, please comment and I will add a link to your blog.
Thanks everyone for participating.