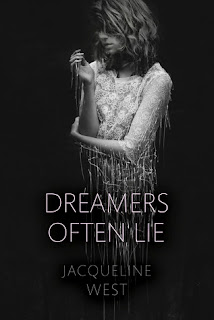 Jacqueline West was the Minnesota Author in the Spotlight here on Booksnob for the month of August.  I got a chance to interview Jacqueline and ask her about her new teen novel, Dreamers Often Lie and her reading and writing habits.  Read on to find out what Shakespeare play is her favorite and so much more.

I’m Jacqueline West, and I live with my family in Red Wing, MN. I write middle grade and YA fiction, as well as short stories and poetry for adults. I’m a lazy gardener, a decent musician, and a mean cookie-froster.

2.      What is the backstory behind Dreamers Often Lie?

Back in 2007, I was teaching high school English in the twelfth smallest school district in Wisconsin. This meant that I was the entire English department…and speech department…and drama department. Some days, I would lead a Romeo and Juliet unit with the freshmen, discuss Hamlet with the seniors, and then direct school play rehearsal. I’d go home at the end of each day with my head full of Shakespeare and drama and YA literature—and, of course, with my students and their lives. These things all tangled together, and I started to write the story that eventually became Dreamers Often Lie.

3.      Usually an author put some of her own life experiences in their book.  Did you do that?  Do you have anything in common with your characters?

Oh, yeah. Like Jaye, my protagonist, I was a high school theatre kid. During college, I paid my bills by acting in shows at the local dinner theatre. Today, I do community theatre when I can; I love getting the chance to step inside of other people and wear their clothes and live their lives for a little while. (It’s a bit like being a writer, actually!)
Beyond that, though, I don’t share much with any of the characters from Dreamers Often Lie. Unlike Jaye, I’ve never had a serious head injury. I haven’t lost a member of my immediate family. I’ve never had William Shakespeare show up in my bedroom. Jaye’s life is a lot more complicated than mine.

My middle grade fantasy/mystery series is called The Books of Elsewhere. Volume One, The Shadows, was released in 2010, and the fifth and final volume came out in 2014. The series made the NYT Bestsellers list and has been published in eleven other countries so far, which still feels unreal to me.
The story revolves around an eleven-year-old girl named Olive, whose brilliant mathematician parents have just bought an old stone house with a mysterious past. Because Olive is very different from her parents, she notices things about the house that they don’t notice…like the oddness of the paintings that have been left hanging on the walls. And when Olive finds an old pair of spectacles hidden in an upstairs drawer and puts them on, she discovers that all the paintings in the house can come to life. She can even climb inside of them, and talk to the people within them, and explore these eerie painted worlds—but it turns out that some of the painted people she meets are manipulating her for some very dangerous ends.

I’m an obsessive, scattered reader. I’m always reading at least four books at once, because I keep one in my purse, one in the kitchen, one in the bathroom, one on the bedside table, one in the car…
I try to avoid reading anything too similar to my current works-in-progress, so these days I read a lot of memoir and contemporary or classic adult fiction. Some of my favorite authors are Margaret Atwood, Neil Gaiman, Kelly Link, Annie Dillard, Michael Chabon, Louise Erdrich, Haven Kimmel, Roald Dahl, Kurt Vonnegut, Sylvia Plath, Bill Watterson, Poe, Bradbury, the Brontes, Dickens, and Shakespeare. See? Scattered.
I have a hard time naming any favorite books because I love so MANY, but if I could only bring a teeny tiny library to a desert island, it would definitely include Jane Eyre, Gaiman’s American Gods, Bradbury’s Dandelion Wine, and the collected works of Shakespeare. And some Calvin and Hobbes.

6.      What is your favorite Shakespeare play and why?

Hamlet. Hands down. It’s endlessly fascinating. It’s so gorgeously crafted (just thinking of some of its best lines makes my heart beat faster) and the characters and their motivations are so rich with possibilities. And then there’s Hamlet himself. He’s so layered, and each of those layers can be interpreted in different ways. Is he sane? Or does he just believe that he’s sane, Catch-22 style? When is he being honest, and when is he just putting on a new ‘disposition’ in order to manipulate others? Is he even lying to himself, and thus to the audience? The reasons I love that play are some of the same reasons I wanted to write a story like Dreamers Often Lie, where the protagonist is a complicated lens, and truth and reality are slippery things.

I’m going to give the flakey cop-out answer and say “everywhere,” because it’s true. Memories, daydreams, artwork, other people’s stories, travel, things I see out the car window… They’re all ingredients that I can put in my mental pantry.

Writing has been my full-time job since 2010. As an author, I do a lot of school visits and writing workshops, both in MN/WI and around the country. The publication schedule of The Books of Elsewhere kept me pretty busy from 2010 – 2014, and in 2015, I had a baby, so I’m pretty busy these days too. I’m lucky enough to have my recently-retired, baby-adoring parents nearby, so now I have childcare two days a week, and on the other days, I have two blessed hours of naptime. I’m sure I’m less productive than I used to be, but if there’s anything that can help you kick the procrastinating habit, it’s a baby. Now I work like there’s a bomb about to go off.

9.      Name one book that you think is a must read for everyone and tell us why?

Just ONE? Sheesh.
This one’s barely even a book, although it was published as one, in one of those miniature, graduation-gift-style volumes: This Is Water, by David Foster Wallace. It will make your heart bigger.

10.  Tell us in one sentence why we should read Dreamers Often Lie.

If you like your novels twisty and odd and romantic, laced with Shakespearean characters and dark humor, Dreamers Often Lie is for you.


Thanks Jacqueline!!!
You can find Jacqueline on her website at:  http://www.jacquelinewest.com/