Books, Women and The Atomic Bomb 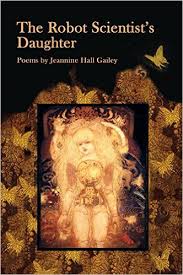 Books, Women and The Atomic Bomb

Jeannine Hall Gailey, author of the poetry collection, The Robot Scientist's Daughter grew up in Oak Ridge Tennessee, near the nuclear facility that created the Atomic bomb.  The poetry in her book reflects her experience growing up in 1970's with a hazardous nuclear plant in her backyard.  In fact, her father was a scientist at the plant. Jeannine's poetry is environmental with a science fiction/fantasy twist.  The Robot Scientist's Daughter is creative and gives the reader a lot to think about and discuss.  So many issues are covered within the pages of this book.  Some of these poems pack a powerful dose of reality and some will scare the pants off of you.

Here is a few lines from one of my favorite poems.

is the shadow in white dust you left behind.

I imagine she either went off with a jazz musician
or followed her dream of veterinary school
somewhere in the Midwest. She dresses in discarded
prom dresses and dances around to the Psychedelic Furs.

White phosphate hidden in her bones, she ignites
the paper caps in cap guns and snaps her fingers
like she's striking a match.

I love this poem.  Gailey is such a master at crafting a striking, visual poem.

Here is the synopsis of The Girls from Atomic City from Goodreads:

The incredible story of the young women of Oak Ridge, Tennessee, who unwittingly played a crucial role in one of the most significant moments in U.S. history.

The Tennessee town of Oak Ridge was created from scratch in 1942. One of the Manhattan Project’s secret cities, it didn’t appear on any maps until 1949, and yet at the height of World War II it was using more electricity than New York City and was home to more than 75,000 people, many of them young women recruited from small towns across the South. Their jobs were shrouded in mystery, but they were buoyed by a sense of shared purpose, close friendships—and a surplus of handsome
scientists and Army men! 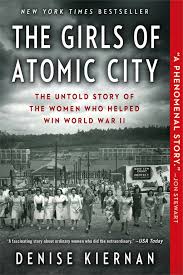 But against this vibrant wartime backdrop, a darker story was unfolding. The penalty for talking about their work—even the most innocuous details—was job loss and eviction. One woman was recruited to spy on her coworkers. They all knew something big was happening at Oak Ridge, but few could piece together the true nature of their work until the bomb "Little Boy" was dropped over Hiroshima, Japan, and the secret was out. The shocking revelation: the residents of Oak Ridge were enriching uranium for the atomic bomb.

Though the young women originally believed they would leave Oak Ridge after the war, many met husbands there, made lifelong friends, and still call the seventy-year-old town home. The reverberations from their work there—work they didn’t fully understand at the time—are still being felt today. In The Girls of Atomic City, Denise Kiernan traces the astonishing story of these unsung WWII workers through interviews with dozens of surviving women and other Oak Ridge residents. Like The Immortal Life of Henrietta Lacks, this is history and science made fresh and vibrant—a beautifully told, deeply researched story that unfolds in a suspenseful and exciting way. (less)


There you have it.  These two books go together like Mac and Cheese.
Have an awesome reading day.